Periphrasis is a unit of poetic speech which both names and describes. We speak of periphrasis when we have the name of a person or a thing substituted by a descriptive phrase but the substitution is not based on logical association. It is a poetic synonym of a word usually expressed by a phrase used instead of a name of an object which isn’t considered poetic or aesthetic enough.

Example 40: Man in the street – an ordinary person; Man in Grey – soldiers; My better half – wife / husband

Periphrasis may be trite and original.

Trite periphrasis is also called traditional or dictionary, language through frequent repetition become well established in the language and turn into lexical units becoming part of the vocabulary:

Original periphrasis also called stylistic, speech periphrasis, the creation of an individual author is a genuine expression which brings out most characteristic features of an object and is aimed at expressiveness. Original periphrasis is a new nomination which may be understood only in the context.

Periphrasis can also be divided into logical and figurative. Logical periphrasis is based on one of properties or perhaps a passing feature of described object.

Figurative periphrasis is usually based on a sustained metaphor or on metonymy. The key word of the collocation being the word used figuratively.

Most often periphrasis is used in fiction. It makes the utterance sound more elevated, refine. 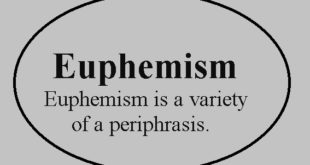